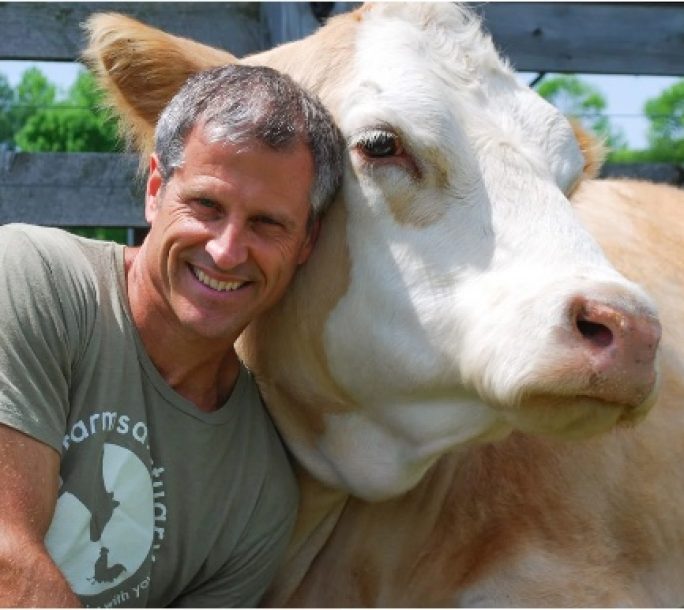 Choosing Compassion for The Holidays! With Gene Baur:

Join us for this radio interview that was part of a “live” holiday event. HealthyPlanet’s Bob DiBenedetto is joined on air by Gene Baur* Co-Founder and President of Farm Sanctuary. They discuss a wide array of issues stemming from our society’s raising and consuming farm animals for food as well as the inspiring work of Farm Sanctuary.
Tune in to hear about the origins and successes of Farm Sanctuary, which houses hundreds of rescued farm animals at their NY and CA locations. You’ll not only hear the reality about the inhumane conditions that go along with living as a farm animal in the US, but the uplifting way that animals at Farm Sanctuary get to enjoy life, be with their friends, and thrive. Each animal’s needs are taken into account, and all are treated with respect and compassion.
Gene has been been advocating for farm animals for decades. He has been hailed as “the conscience of the food movement” by Time magazine and named one of Oprah Winfrey’s SuperSoul 100 Givers. He is a pioneer in the field of undercover investigations and farm animal rescue.
Listen in to get inspired, informed, and empowered to become part of the solution. May your holiday celebrations be 100% free of animal suffering and Happy Holidays to All!

Gene Baur is a pioneer in the field of undercover investigations and farm animal rescue, and has been hailed as “the conscience of the food movement” by Time magazine. Since the mid-1980s, he has traveled extensively, campaigning to raise awareness about the abuses of industrialized factory farming and our system of cheap food production.

Gene has visited hundreds of farms, stockyards, and slaughterhouses, documenting the deplorable conditions. His pictures and videos exposing factory farming cruelties have aired nationally and internationally, educating millions about the plight of modern farm animals, and his rescue work inspired an international farm sanctuary movement.

Gene has also testified in courts and before local, state, and federal legislative bodies, advocating for better conditions for farm animals. He played a key role in the first-ever cruelty conviction at a U.S. stockyard and enacting the first U.S. laws to prohibit cruel farming systems. His work has been covered by major media organizations, including The New York Times, Los Angeles Times, Chicago Tribune, The Wall Street Journal, ABC, NBC, CBS, Fox, CNN, NPR and the BBC.

Gene has published two bestsellers, Farm Sanctuary: Changing Hearts and Minds About Animals and Food (Simon and Schuster, 2008) and Living the Farm Sanctuary Life (Rodale, 2015), which he co-authored with Forks Over Knives author Gene Stone. Through his ongoing writing, activism, and speaking engagements, Gene continues working to expose the abuses of factory farming and to advocate for a just and sustainable plant based food system.

Gene has a Bachelor’s degree in Sociology from California State University, Northridge and a Master’s degree in Agricultural Economics from Cornell University.